How to Choose the Right Banquet Hall Architecture 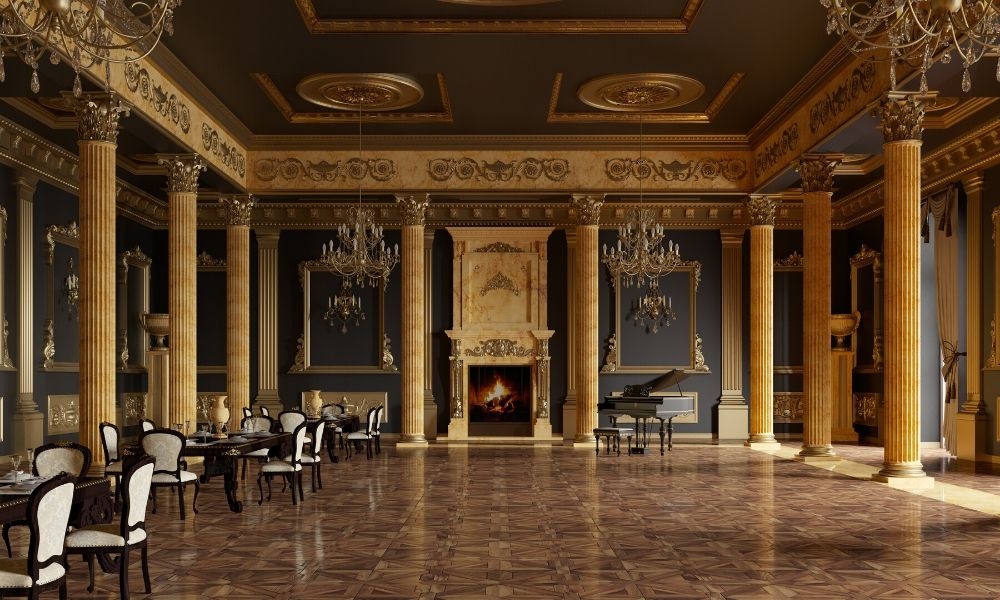 Understanding how to choose the right banquet hall architecture
can distinguish your area and provide a beautiful and functional
outlet for parties and events. Your focus on intentional
architectural creativity will help you draw clients in and provide
them with an occasion they won’t forget. To make the best-educated
choices, it’s helpful to understand historical choices architects
have made and the periods that have coalesced as these choices became
popular styles. Gothic, Baroque, Neoclassical, and Modern
architecture conventions provide hundreds of years of insight, and
they all are incredibly different from one another. But before you
look for inspiration, you need to consider who will be coming through
your doors.

When designing a
banquet hall, you must have your future clients in mind. How your
architecture strikes people will determine whether it fits the
aesthetic of their event. You want something that fits a variety of
potential events while being unique and refreshing to your clientele.
You’ll want to keep several demographic categories in mind, one of
which is age. It’s likely that if you service younger clients,
they’ll connect with a modern approach whereas senior guests may
appreciate classic styles that hearken back to the past. Sensitivity
to your region is important as well. If you’re building in a
southern state, a rustic design complete with wood features could be
popular, while a clean and minimalistic approach works for urban
areas on the east coast. And if you service an area that is not high
income, consider toning down the detail and avoiding too many ornate
features. After assessing what population you can target, you can
then transition into thinking about how people have designed things
in the past.

The Gothic
architectural period began in Northern France in the 12th
century, lasting until the Renaissance period took hold in the 16th
century. Like many names for groupings of architectural conventions,
people called it Gothic after the fact. During the Renaissance, many
thought buildings made in the Gothic style did not fit their
standards for order and regularity. As such, they named these
buildings after barbaric Gothic tribes in France as an insult. Gothic
architecture borrowed heavily from Roman design; both of which we can
characterize by their archways and the innovations they made to
increase scale. Gothic arches were taller and pointed, like
Islamic-style arches. These, as well as the hallmark rib vault and
flying buttress technologies, allowed Gothic buildings to heighten,
walls and pillars to thin, and for the use of larger windows. The
added height and light lent an overall sense of transcendence to
projects that revolutionized architecture and defined the period.
This transcendence was paramount for cathedrals such as the Notre
Dame cathedral in Paris.

To incorporate
Gothic features to your banquet hall, consider using some
Gothic-inspired
frieze moulding to add depth and period-specific character.
You could also include ceiling ribbing to mimic the transcendent
quality of a cathedral.

Baroque style is
full of movement and complexity. The technical term used is dynamism,
and it manifests in curves and rich ornamentation that plays with the
concepts of light and shadow. Architects striving for these qualities
layered detail upon detail to create the impression that one could
never fully take in every facet. These details also descended into
the absurd and asymmetrical that cause viewers to ponder and
question. Every part of a Baroque design should typically draw the
eye to a specific detail-rich spot, such as an entryway.
Historically, this period succeeded the Gothic period and lasted from
the 16th to the 18th century. Taking various
shapes, it became popular in Italy, Spain, England, and France. It
was, like Gothic architecture, largely expressed in church and
cathedral designs. At the heights of the Catholic Church’s wealth,
Baroque extravagance was perfect for communicating its institutional
power and wealth.

If you’d like
to style your banquet hall after this period, take the risk of using
many kinds of sculptures throughout your venue.

While Baroque architecture provided a loud, hard to ignore style,
Neoclassical practices were much more orderly and reasonable. In
fact, the style came about as a reaction against Baroque excess.
Running almost parallel to the Enlightenment, the Neoclassical period
was between the 17th and 18th centuries. The
Enlightenment’s adherence to rationality affected this style above
all else, as it featured very simple geometric forms and careful
attention to symmetry. Though the Enlightenment influenced it, many
referred to the Neoclassical period by that name because it models
after Greek architecture. Doric and Ionic columns particularly
illustrate the flat and unadorned simplicity of Greek design; these
became very prevalent in the 18th century. Rather than
creating immersive detail on walls and ceilings through sculpture,
architects in the Neoclassical style included flattened out and
regular sculptured patterns. Domes were another common (symmetrical)
aspect. The idea behind these qualities was that architecture could
reach near-perfection while avoiding the sloppiness of Baroque
buildings. The US Capitol building is a memorable example of
classical practices in action.

If you think the
Neoclassical route is right for your clientele, you can incorporate
dignified wood-carved
Doric, Ionic, or Corinthian columns together with heavy use of
Acanthus
details into your floor plan. Wood carved columns are
a good option if you want the look of Greek columns that is
friendlier and less imposing than stone.

In the 19th
and 20th centuries, designers prioritized function over
architectural form. This period became the Modern period, and new
materials like glass, steel, and concrete characterized it. And like
the Neoclassical period, Modern architecture avoided ornamentation
and embraced minimalism instead. Modern minimalism was stark and
new—architects took pains to avoid historical designs and shirk
conventions altogether by endlessly experimenting. This was due to
the drastic changes the world was experiencing. Expression needed to
change as well. Industrialization changed what work looked like for
millions and upended social norms. And worldwide wars further
challenged how people saw the world. In the place of past styles came
rectangular forms and the prevalence of the line or plane. Frank
Lloyd Wright is an exemplar of the Modern period in that he often
used low horizontal lines with his Prairie Style houses, yet also
experimented significantly to avoid creating ties to any one style.

If you want a
modern look for your project, consider using metal and glass and
leaving the walls relatively bare. To provide some flare you can
experiment with the effects of lighting instead.